A Peep into Drake's Life - Drake in Amsterdam

During the 1590s Drake must have realised that he had sailed past the zenith of his nautical career, yet he yearned to serve his country at sea. Sir Francis was at the stage of life when he wanted to publish his voyages and proof the Hondius Broadside World Map. Drake had edited Sir Francis Drake Revived, which narrated his path to riches that culminated with the mule train robbery. He had helped to compile The World Encompassed. Drake would never see these major versions in print since both were published after his death in the early 1600s.

From Bawlff we uniquely learn that in 1594 Drake visited Jodocus Hondius, who had moved to Amsterdam in the previous year. Jodocus had engraved a portrait of Sir Francis. He was in the final stages of completing what would be his famous Broadside World Map. Drake was in Amsterdam finalising the map. This included depicting his route with a dotted line. Since this map included the Cavendish track, engraving could not have commenced before 1589. I was pleased to examine the original print, when I visited the Rotterdam Maritime Museum.

Early during my visit to Amsterdam, it occurred to me that I should try to ascertain where Hondius lived, when Drake visited him. This was a long shot at trying to establish intimacy in an effort to walk in Drake's footsteps. The History Museum sent me to the National Record Office. Tantalisingly they located an ancient document that showed Hondius purchased a house in Kalverstraat in 1604. A book in the Maritime Museum library stated that in 1593 Hondius bought a house in Kalverstraat. This street runs south from the Nieuwe Kirk meaning the New Church. The Kalverstraat has always been one of the most expensive streets in Amsterdam, which is still lined with exclusive shops. Hondius apparently lived above a shop in a multi-storied house. His portrait reveals him as a thickset jovial-looking man.

A pictorial map of Amsterdam drawn around 1538 enables us to follow Drake's movements from his ship to the house of Jodocus Hondius. All the buildings that I photographed are depicted on the map. The map proves that the shape of the fortified towers, churches, houses and shops have remained very similar in shape. For instance the houses still have high and steep roofs.

Drake would have sailed to Amsterdam and anchored in front of the town. He would then have been ferried into the harbour to be set ashore along the wharf at the Damrak. The main street runs along the west quay of small harbour. This is a part of the larger old harbour, which during Drake's visit ran further south until it reached the Dam over the River Amstel, from where Amsterdam derived its name. The dam has subsequently expanded up and down-river and thus greatly reduced the size of the original harbour.

On Drake's right as he walked towards Hondius's house was the Nieuwe Kirk. This New church is situated west of the Dam. This Gothic basilica is 15th century. The building no longer serves as a church and is only periodically open for exhibitions.

The Begijnhof adjoins the Kalverstraat and was thus only metres from Hondius's house. This was a former convent from the early 14th century. The house at 34 dates from around 1465. It is claimed that this house is the oldest maintained wooden house in the country. The private chapel opposite was built around 1390. After a fire it was completely rebuilt in the 1490s 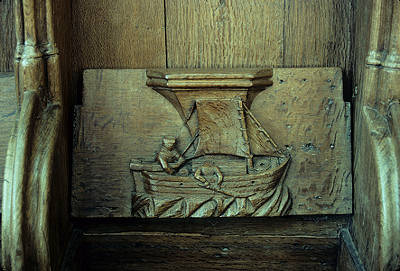 Choir stall at the Oude Kerk

The Oude Kerk is another unmissable landmark. This Old Church in the heart of the old city is located on the east side of the harbour and dates from 1306. The church was dedicated to St Nicholas, patron saint of seamen. The three stained glass windows in the northeast corner of the Lady Chapel were created in 1555. The paintings on the wooden curved ceiling were added in the late 15th and early 16th centuries. The choir stalls comprise 15th century carvings.

The church overlooks three dykes to the east that run parallel to the harbour. Between the second and third dyke is the Nieuwmarkt. This New Market Weigh House originally formed part of the city's fortifications. Here ships would load and unload produce. Later the adjacent square was the site for public executions. To the north and seaward is Schrierstoren Tower. This tower was built in 1480-88 to defend the medieval harbour. Here women wept as they waved goodbye to the sailors. This is why the edifice is also called Weepers' Tower. The tower is situated on the seaward side of the Oude Zijde - the Old Side of the city. This is a misnomer because the New Side to the west is the older part.