This was the second anchorage on the Drake and Hawkins last voyage. Late on the 27 September 1595 the fleet took a respite on the WSW side of Gran Canaria. Five hundred men were landed. A watering party was ambushed. Also, some troops and a surgeon were killed. English prisoners were taken, some of whom confessed that the destination of the voyage was the West Indies. Consequently an advice boat was dispatched to warn the principal ports. It left independently of five frigates, which had been dispatched from Spain to warn the Indies of the pending English raid. These subsequently arrived in the Canary Islands. The Spanish movements were brisk and resolute: under Drake, the English were extremely dilatory. Drake and Hawkins weighed anchor at 10 pm on 28 September. 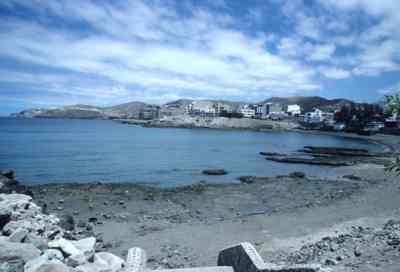 Arguineguín consists of a beach either side of an elevated, rocky, populated promontory. The much smaller beach towards the north-west comprises black sand and was fed by a narrow stream, which is now a cemented channel between suburban modern buildings. The much wider beach to the south-east comprises large pebbles interspersed with narrow stretches of sand; just wide enough to accommodate a ship's boat. If only one beach were used, it had to be the longer one depicted here at the mouth of the wider watercourse.

Despite development, the port's configuration was easily observed. From the hill north-east of the town the panoramic view of the anchorage included the river valley in which the English must have searched for provisions. In January 2010, I returned to hire a boat to photograph the beaches from whereabouts Drake had anchored. The excursion turned out to be free. I also needed to photograph the water supply. The tree-studded, dried-up, stoney, thirty metre wide river bed was very shallow. The camber of its pebbles denoted its previous meanders. From the road bridge I took more up-river pictures that provided a mountainous backdrop to where Captain Grimston was slain.

As I visit so many Drake places around the world, I have always thought there ought to be far more commemorative plaques outlining Drake's sojourns. Whilst in the town, I was excited to learn of two plaques on Spanish soil at Arguinegúin. On the police station there were two ceramic tiled plaques installed in 1995 - 400 years after Drake's visit. I translated the text which reads as follows:

"On 18 October 1595, Drake, after his unexpected defeat in his attack on Las Palmas in Gran Canaria, with 27 ships and 2,500 men, he headed for Arguinegú in to rest and provision before departing for America.

Furthermore, he saw himself obliged to set sail that same night before a renewed attack by the valiant Canary Islanders who took prisoners and killed some of the English, including Drake's friend Captain Grimston.

Drake was the most celebrated English seaman after Nelson. He established the milestone of utter naval arrogance and was the second to sail around the world. The island and the actual court of Philip II jubilantly celebrated the important victory over the greatest corsair that history has ever known. 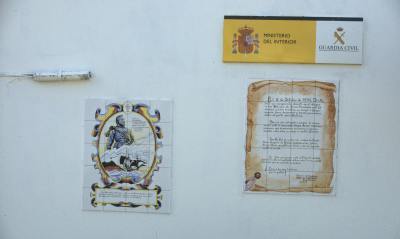 Plaques on the police station at Arguinegúin

The other plaque shows the Drake Plymouth Hoe statue and outlines when and where Drake was born and died. It omits the word Sir before John Hawkins and concludes: "The English admirals and corsairs Sir Francis Drake and John Hawkins intended this attack to conquer the island of Gran Canaria for its commercial and strategic importance."

The text accords Drake and Hawkins as a powerful force, which is then used to put their valiant, violent efforts against a small group of men, searching for provisions, who became detached from the main force into context. The plaques defined the death of Englishmen commanded by one of the greatest corsairs who ever lived as a great victory for the islanders. By elevating the might of Drake, the Spanish victory can also be enhanced. Again, in wars between countries it is interesting to perceive bias and how a victory is defined. The compiler of the information has clearly consulted the work of Kenneth Andrews, Drake's Last Voyage but I wondered about the provenance that states the violence between the English and Spanish was celebrated at court. Surely the king was more concerned about the destination and objectives of the English fleet.