When one reads the secondary accounts about the Armada and the launch of the fire ships, the reader hears only about Calais and not a break down of the area of the drama, which spanned over 14 miles. This feature encourages members to embark upon an economic and exciting day out from Dover, where the crescendo of the Armada story is laid out before one's own eyes. The principle primary source is Defeat of The Spanish Armada, Vol II, Navy Records Society, 1981. After four sea battles the crescent shape of the Spanish Armada remained in tack. The Spanish had anchored off Calais attempting to rendezvous with the soldiers of the Duke of Parma. The idea was that the ships would escort the soldiers serving in the Low Countries across the Channel to SE England in their lighter vessels. The English knew this so drastic action was now vital.

At 5pm on Saturday 27 July the Armada anchored, "...betwixt Calais and Calais Cliffs, and our English fleet anchored short of them within culverin shot of the enemy." [A Relation of Proceedings, 15] The English had in fact, anchored within a mile to the west and windward of the Armada. Richard Tomson in a letter to Walsingham, wrote that the Armada anchored, "...within two miles of Calais,.." [345] From, "A Brief Abstract of Accidents", Vol. II, 57] we read, "Upon Saturday the 27th, about 8 of the clock at night, the Lord Henry Seymour, Admiral of the Narrow Seas, joined with the Lord Howard in Whitsand Bay, over against the cliffs of Calais, and anchored together; and the Spanish fleet rode at anchor to the leewards of the Lord Admiral, and nearer to Calais road."

Due to the onset of a shoaling sea that remained so as far as the Low Countries, Medina Sidonia knew that the open roadstead of Calais would be as close as he could safely anchor to unite with Parma. Calais was a neutral port hence the Spaniards purchased food.

Medina Sidonia dispatched urgent messages to Parma, emphatically enquiring why he had not been informed about Parma's state of readiness. Parma's replies stated that he would not be ready for several days. The returning messengers were of the opinion that the troops at Dunkirk and Nieupot were not in fighting condition. The Armada was precariously huddled before Calais and had not secured command of the sea. The intricate rendezvous could not be supported by the limited communications network of the era. Neither commander had been in effective contact with each other. Messages from Sidonia to Parma took up to a week to arrive. Parma's replies took a little longer to reach Sidonia because the dispatch boat would have to search for the Armada, which would now be at a different and unknown location.

In addition, the Dutch were still blockading Parma's boats and both Spanish commanders were weighed down by a plan, which they now confirmed was doomed from the outset. A coast with no sheltered port and with shallows which caused strong currents, made an unsuitable rendezvous point, where soldiers had to be embarked free from enemy interference. Both Sidonia and Parma had done their best but had been the victims of Philip's palace-chair theories.

On the morning of Sunday 28 July, it was resolved during a council of war aboard the Ark Royal to use fire-ships. Being anchored to windward, along with the forthcoming easterly tidal stream, created ideal conditions for the use of fire-ships as a means of breaking the Armada's iron-cast formation. The Spaniards had forecasted the use of "hell burners" which were being prepared in Dover. However Drake, still a man of spontaneity and flair, was so enthusiastic about the idea that he suggested ships should be sacrificed from the fleet. This he knew would save time and timing had always been his forte. Drake contributed his ship the 200 tons Thomas Drake, which had sailed on his 1585 voyage. The document, (Deposit 346/F588) in the Devon Record Office states that in October Sir Francis received £1,000 compensation for his offering. Seven others were selected and prepared by midnight. According to Thomas Cely, captain of Drake's Elizabeth Drake, Sir Francis was an expert "in smoke and incendiary devices" and must have played a leading role in their preparation. The English hoped that the "ships from hell", would scatter the Armada seaward and cause some to run aground.

Propelled by the wind and tide, the flaming ships reaped their desired effect. The Spaniards had positioned boats to tow them away. However they had not expected ships to be so potently laden. In addition to the flames, the terrified Spaniards had to contend with explosions and primed cannons, blasting and thundering away at random. Six of the ships reached the Armada. Most of the captains severed their cables, thus abandoning their anchors to the sea. Only Medina Sidonia and four consorts calmly weighed anchor and re-moored out of danger.

By breaking the Armada's formation, the fire ships had achieved what four battles had failed to do. Yet the fire-ships did not destroy any Spanish ship. The largest galleass, Mocada's San Lorenzo broke her rudder whilst running foul of another ship's cable. It was run aground on Calais bar, beneath the guns of Calais fort, "near the haven's mouth and town of Calais." [15] Howard dispatched a longboat. These hundred men overran the vessel and stripped it of value. This action was rather futile since this vessel was now out of the fight and Howard was needed to pursue the scattered Armada; which was heading for the Zeeland shoals. Yet nobody criticised him.

In 1984 I had managed to photograph Calais conveniently and comprehensively from a cross channel ferry. This was the first journey I had made from England without actually landing in a foreign country. However after I had procured the primary sources, I realised just photographing the entrance to Calais had been insufficient. In 2005 I decided to photograph this distinctive juncture of the story by air because the ensuing events would be played out between Calais and Oostende - a distance of fifty miles. Various air clubs in Kent had eventually declined my request. The reasons included they were not licensed to carry a photographer as this was deemed as being commercial. Also the pilots would not risk flying at fifty feet above the sea. By telephone I was eventually recommended to Ian Chandler of the Seawing Flying Club at Southend on Sea in Essex. I was to hire the club's Cessna 172 - a high wing aircraft for unimpeded photography at the low fee of £133 per hour for a three-hour sortie. Ian's services by law came free. This was my first experience of hiring a plane in England. Ian had twenty-five years' flying experience and was known to be "adventurous". At the end of the flight, I learnt that flying so low over the sea to replicate a mariner's view was a new experience for Ian, this high-flying accountant!

I had to photograph the story backwards because the aircraft had a window that only opened on the left. By the time we reached Calais, sunshine had ceded to cloud and then rain at Wissant Bay. This was disappointing because this was visually the most spectacular part of the story. The entire coastline was flat except for Wissant Bay. At the western end of the bay is the 72 metres high Cap Gris Nez, meaning Cape Grey Nose, which is twelve nautical miles from Calais. This cape provides more shelter because from this point eastwards, the coast bears away from the prevailing south westerlies. The bay is six nautical miles long and terminates at the 131 metres high Cap Blanc Nez, meaning Cape White Nose. Finally we flew low over Cap Gris Nez, which gives the Armada student an all embracing view. One sees the slight curvature of the bay with its three nautical miles of cliffs, mainly rising on the west side of distant Cap Blanc Nez. Beyond that headland the coast remains flat and frequently backed by sand dunes all the way to Oostende.

I had photographed this part of the story the story from a mile seaward. Therefore I was where the ships were anchored. This aerial visit had given me a great sense of distance and geographical positioning, which has never been attempted by previous authors. This experience had whetted my appetite for more contact.

In June 2006 I sailed from Dover to Calais. This time I had a lot more coastline to study compared with my first visit. I learned that the ferries sailing to France took a half-mile more westerly route and made landfall only three nautical miles off Cap Blanc Nez. The Armada maps show that the core of the English fleet was anchored here, 5.7 nautical miles west of Calais. It was easy to visualise the English and Spanish fleets at anchor in their battle formations. Just where the ferries "touch" the position of the outermost English ships, they then follow the coast to Calais. When sailing to England the ships sail a little further away from the coast and steer northwards before reaching Cap Blanc Nez. 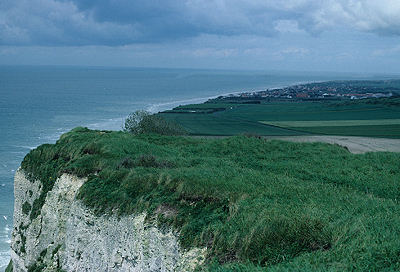 When on board I displayed my first published Drake biography at the P&O information desk, I was granted access to the bridge and cordially welcomed by Captain Gardner. Upon making landfall at Cap Blanc Nez it rained! This prevented any photography. In Calais a taxi conveyed me to Cap Blanc Nez. The sun shone and provided a spectacular view of Wissant Bay. I hitchhiked to Cap Blanc Nez. Here I was able to look back across Wissant Bay and forward towards Calais, which between the showers was now fully illuminated. When sailing "home" that evening, the timing of the photography of the spectacular vista, from Cap Gris Nez to Calais, coincided with the Spanish and English ships at anchor.

I sailed to Calais next day to obtain the closer passing view of Wissant Bay looking towards Calais. Captain Gardner permitted me to take pictures free of glass by positioning myself outside on the catwalk. This was a nervous experience for the uninitiated. I had to lean outwards because of the slanting windows of the bridge. There were only three widely spaced slanting railings preventing me from falling overboard. To add to the sense of fear, I constantly noticed the sea 32 metres beneath my feet, as I shuffled, huddled along the narrow grid. Like the first excursion in 1984, I remained on board for a quick return to Dover.