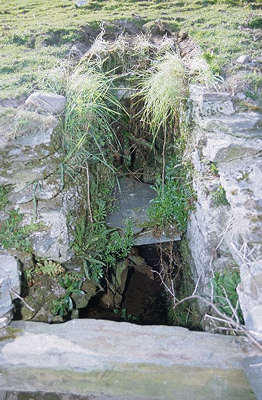 the well head at Crowndale Farm

I took Susan Jackson to Crowndale after meeting the owner on a recent previous visit. I realised that the pictures I took in 1982 were too few and earlier in 2008 I remedied this deficiency. The owner is always pleased to show visitors around the site of Drake's birthplace. Amanda Toop showed me what she calls Drake's Well. This orifice that horizontally emerges from the ground on a hillside, took on a new sense of life when Susan was scrutinising its construction of stones and slates. There were two parallel slates that protrude horizontally. Susan being the expert on Tudor England took great delight to see a Tudor well in situ and explained that this was the coolest way to store butter and cheese. The blocks would have been placed on the lower slate and the upper slate acted to screen the sun. From the location of the well, Susan confidently speculated the position of Edmund's cottage and the original farmhouse a few metres up the hill. On the site of the cottage there was a scattering of stones lodged in the soil.

An information plaque on Drake's Walk above the present-day farm, states that the house survived a fire in 1549. The house was demolished in the 1850s when its stone was used in the restoration of Lewtrenchard Manor House, situated about eight miles to the north. When I arrived I was relieved to find it is now a hotel and restaurant. This facilitated photography, which encompassed three sides of the house. There is no record of where the Crowndale stones were placed.