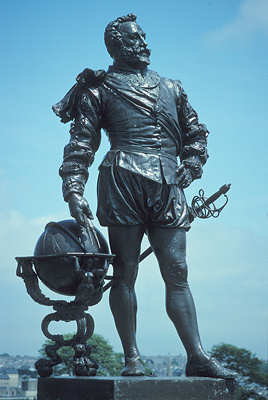 Statue of Drake
on Plymouth Hoe

"A captain raised whose glittering memory will last undimmed through future centuries admired and eulogised eternally."

This was written by Juan de Miramontes and it exactly epitomises our views concerning our admiration for Sir Francis Drake. Drake's memory has lasted through the centuries. This paper has been prepared to portray Drake the person, objectively, based upon fact, within the context of the time in which he lived. The society defends Drake the man, in view of opinions expressed through media contributions by those who analyse Drake, within the modern context of political correctness.

Drake's memory is deliberately perpetuated by those who admire the man and his achievements. Through research both by training and profession, Susan Jackson has studied Drake the man, at an unequalled depth and unvarnishly presents him on behalf of the society. Therefore, Sir Francis Drake was no paragon. He was very human with his faults and failings. Drake was ruthless, vainglorious, an attention seeker and tended to boast. On some of his voyages, he was accused as being too fond of his own ideas and uncollegial.

In the long history of the British nation, we have produced many brave men; skilled sailors; navigators and naval commanders; intrepid explorers, brilliant strategists, outstanding political administrators and other colourful characters. However, there has only been one Englishman who possessed all of these qualities and executed them with such panache and elán that has created an eternal legend. To emphasise this point, the novelist Georgette Heyer wrote, "There was and is only one Drake." For this endorsement alone, Drake deserves to be perpetually honoured. Even Drake's enemies admired him. The commander of the Spanish Armada described Drake as a "great seaman and gifted soldier."

One cannot help admiring his radical and unique achievements. Examples include the circumnavigation of the world; the victory at Cádiz and the defeat of the Armada. There was Drake the naval strategist, whose concept of battle tactics was before his time. His formulated ideas lasted into the 20th century.

Drake the person deserves equal recognition and admiration. In Susan's extensive studies of Drake the man, she has endeavoured to find the man. This has been difficult because his personality is overshadowed by his achievements as a sailor, explorer, privateer and commander.

During the barbaric age of the 16th century, Drake was admired by friend and foe for his humane treatment and kindness towards his enemies, when they had surrendered to him in battle. Subsequent generations, and especially, those of this century, could have learnt valuable lessons in human rights and decency from Sir Francis. We should applaud his kindness. The primary sources are laced with examples of generous deeds. These include loans to friends, associates, relatives; donations to public works, support of other voyages and gifts to released prisoners.

We should admire his patriotism, his loyalty to his country and his affectionate attachment towards his town of Plymouth. Drake was always the first to make financial donations towards public projects. His care extended beyond the grave, since he made Plymouth and its poor beneficiary of his will.

We should applaud Drake's care of the men who served under him. Their affection and respect was illustrated at Nombre de Dios in 1572, when, faced with the choice of seizing treasure, or attending to their wounded captain, they chose the latter. Furthermore, the vast majority of Drake's subordinate officers, held him in the highest esteem. "We all remain in great love with our general and in unity throughout the whole fleet."

We must praise his love for his God and his dedication towards the Christian faith. The same applies to his business acumen, his wit and keen sense of humour. Therefore, Sir Francis Drake must have been well-liked and fun to know. Drake needs to be admired for his duties as a civic leader and politician. Historians have often overlooked this facet of his life. Drake was an excellent Deputy Lord Lieutenant. He served Plymouth as a very competent town councillor, mayor, MP and first citizen. By request, Drake also served as town governor. The Plymouth "Black Book" provides numerous examples of his participation in town affairs. To emphasise his generosity, Drake was out of pocket after having a leat constructed, which brought water to the town from Dartmoor. Drake fortified Plymouth and the island.

Above all, we should marvel at Drake overcoming a difficult childhood in a working class background and rising to the highest social rank. This was a miraculous achievement in snob-ridden Elizabethan England, where if one was not of "gentle" birth, one had no social status. Despite his fame and immense wealth, Sir Francis never lost touch with the ordinary person. Hence, like Juan de Miramontes, Susan and the society, want to see Drake, "admired and eulogised eternally."

Susan is particularly tired of seeing Drake ignorantly portrayed as a bloodthirsty, money-grubbing, slave-trading pirate. The timely formation of the society will honour and serve the memory of Sir Francis by representing him objectively based upon facts.

A pirate attacks any ship on the high seas; even those of his country. A privateer, only attacks ships of the enemy country. Drake only plundered Spanish and Portuguese ships and usually with the tacit approval of his government. This modus operandi made Drake a privateer.

Drake's participation in the slave trade was minimal. He was basically a marine logistician. Within three years of his second and final slaving voyage, Drake was harmoniously working with the escaped slaves in Panamá. He was the first white man to accord Blacks equal rights. This relationship was acknowledged by some of Drake's contemporaries. Hence, no acts of barbarity can be attached to Drake's name. For instance, when seizing ships off the west coast of South America, not one Spanish life was lost.

The accusation of profit seeking can only come from those who do not understand the principles and concepts underlying Elizabethan maritime expansion. All Drake's voyages were financed by joint-stock enterprise. This forced him to make a profit, in order to appease his backers; the biggest of whom, was usually the crown. Modern-day, ill-informed critics, which include some professional historians, do not seem to appreciate how the vagaries of government policy often constrained and dictated Drake's actions.

We have a moral and serious obligation to represent Sir Francis Drake in his true guise and to present an accurate and objective assessment of his personality and character. We must also ensure that he is judged within the moral contexts of his time. If we fail to investigate, to view Drake objectively and try to divorce the man from his age and environment, then we are committing an historical solecism and condemning an Elizabethan for being an Elizabethan. Television historian and author, Dr David Starkey told us that Drake was an extraordinary man.