For 1569, we have no proof of Drake's nautical movements: only speculation. Lady Eliott-Drake wrote that during the early part of 1569, Drake sailed with Sir William Winter to the relief of La Rochelle. She does not cite her source. Thomson has reproduced this claim, defining the relief as supplies and arms. However, the great Victorian Drake biographer and naval historian, Sir Julian Corbett surmises that a seaman as experienced as Drake, would have volunteered or been pressed into serving under Sir William Wynter, master of Naval Ordnance and Surveyor of Ships. Furthermore, Drake would have been eager to manifest his patriotic naval loyalties, after the rift with Hawkins at San Juan de Ulua.

In the Thames two large fleets of merchantmen were awaiting convoy. The wine fleet was bound for La Rochelle, to be commanded by Sir John Basing. La Rochelle was a port controlled by French Huguenots in their struggle against the ruling Catholics. The wool flotilla with a larger guard of seven warships was destined for Hamburg, which was also held by Protestants in their religious struggle against the Spaniards, who occupied the Low Countries. Both ports enjoyed strong trading links and military support from Elizabethan England. Both fleets sailed in April on a mission, blending commerce with support from their rebellious, religious allies. Action was expected near or at Hamburg from the Spaniards. Hence this is one of two reasons why Corbett places Drake as a master in this fleet. Also the Rochelle fleet did not return until July. This would not have given Drake time to arrange his wedding.

Hamburg began its life as a missionary settlement in the 9th-century. Positioned between the Alster and Elbe rivers, Hamburg became a moated, walled city of significant mercantile status. It enjoyed free trading rights, exempted from customs duties. Hamburg became a member of the Hanseatic League - a trading bloc of North Sea ports. In 1529 the city embraced Lutherism receiving Protestant refugees from neighbouring Netherlands and France. Due to the fire of 1842 that engulfed the city and the British bombs of 1943 very little of 16th-century Hamburg remains. The old part is called the Alster.

Sailing east along the North Sea, Drake would have brushed to starboard a chain of low-lying, near shore islands called Ostfriesische Inseln then passing to port, the two Newerk Islands that guard the entrance to the twelve miles wide estuary of the River Elbe. As Drake entered Germany's main nautical trading artery with its high volume of sailing traffic, it appeared that he had reached a vast inland sea. The mighty river is a kilometre wide at its narrowest point; therefore galleons would not have experienced manoeuvring problems in changing points of sailing to the wind. The port lay sixty miles up the River Elbe. Sailing so far up a river would be a unique experience for Drake. Since Drake possessed the adventurous mentality to sail around the world, he may have come here during life aboard the North Sea trading hoy. From a typically straight stretch of the river, Drake would have enjoyed a clear approaching view of the mile wide walled city with its collection of church spires piercing the skyline. Ships entered the channel called the Binnenhafen that ran in front of the city. Ships finally moored along its quay. 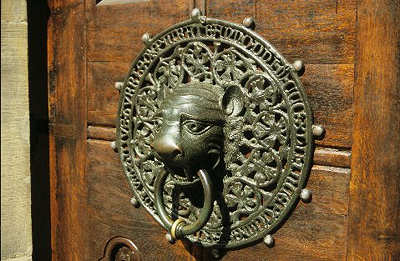 The closest church to the quay is that of St Katharinen built between 1350 and 1420. By 1426 the nave was extended to a gothic pseudo-basilica. Only some of the tower's walls, twenty-three metres of the spire, a bell from 1454 and two furnishings survive. In 1566 Mayor Wetken erected an epitaph in memory of his two sons who died during childhood. This St Nicolai sandstone monument is located on the north side of the nave. Wetken and his wife are depicted kneeling in prayer above the two deceased, shrouded children. On the south side of the nave is an early 15th-century statue of St Catherine.

Proceeding north, Drake would have arrived at the oldest church in Hamburg, St Petri, which dates back to 1195. Only the north wall of the nave beneath the windows is original. However at the west entrance on the left door is an ornamental bronze door handle of a lion's head. This is the oldest work of art existing in Hamburg. The frame upon which the head is mounted states the foundation of the tower to be from 1342. One can climb the tower to a height of 544 feet for an embracing view of the city's churches and waterfront. I settled for a 360° prospect at 330 feet due to the heat radiated by the metal spire. 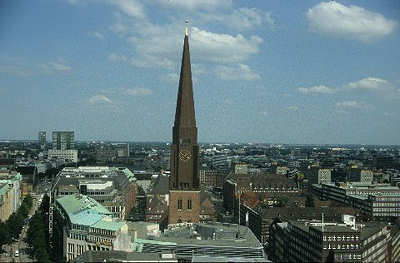 Less than 200 metres east of St Petri is the 11th-century St Jacobi Church, which dates from 1255. A photograph in the church booklet, taken in 1944 shows the nave full of rubble from the bombed roof. The tower is intact minus its spire. The present-day reconstruction has cleverly recreated the original designs. Once again my photography had to focus upon the pre-Drake church furnishings. The high Trinity Altar dates from 1518. St Peter's Altar carved in 1508 is located in the baptistery to the south. St Luke's Altar crafted in 1499 is located in the second south nave. The medieval room at the north-east corner is the oldest room in Hamburg.

On the west side of the city lay the 14th-century St Michaelis Church, destroyed by the city fire. The rebuild was bombed to destruction except for the 19th-century outer walls and spire, which are on or near the exact site of the original.

Situated about eighty metres ESE from St Petri Church within the building at Speersort 10 is the oldest remains in Hamburg called the Bishop's Tower or the Hammaburg Tower. The foundations of the residential and defensive tower from around 1040 gave Hamburg its name. These rounded stones were discovered in 1962 in the heart of the city's origins.

Initially documenting Drake's wake along the River Elbe out to sea potentially presented an expensive, daunting and difficult venture. A high-speed catamaran ferries day-trippers and holidaymakers to Germany's only offshore Helgoland Island, located forty miles north-west of the mouth of the River Elbe. I presented my published volume one of In Drake's Wake at the Helgoline ticket office. I stated that the Hamburg section was in need of expansion for the next reprint. I studied a large picture of the vessel that typically only offered on-deck views from the stern. A huge wake would spoil any photograph. The assistant telephoned the captain who was sailing to Helgoland. To my delight, the captain gave me permission to take pictures from the bridge. Two days later at 08.40, I met 28 year-old Captain Patrick Ehnert. I received unique permission to travel bridge class all the way out and back to recreate Drake's outward and homeward passage of this part of Drake's voyage! The sky remained blue and the sun was conveniently behind the camera all day. I was able to avoid including the bow by settling for standard angle views. This sufficed for all locations along the river with its flat banks, which in places, fortunately comprised fields.

Sailing up-river at 36 knots against the wind meant that I only ventured on deck when a photograph was required. It was an unusual experience to be braced with a camera against a wind speed of about 50 knots. Remaining on deck sailing down-river was just about bearable. Thanks to the captain, I was able to photograph the River Elbe in both directions cheaply, continuously and very conveniently.